You can display critical paths on Gantt charts. In the Gantt chart's "Options", check the box in the Critical Path section marked "Display".

A red bar appears under the Gantt bar being displayed.

Issues meeting the following criterion are considered a single group:

A buffer period(slack) is the number of days used to determine whether or not a preceding issue is included in the critical path. Buffer periods can be set on a project's Settings > Lychee Gantt Chart tab.

An issue preceding a "Critical Path Issue" which fulfills 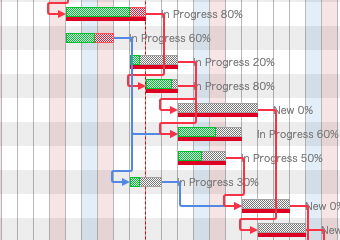